From Wikipedia, the free encyclopedia
Jump to: navigation, search
For other uses, see David Axelrod (disambiguation).

Following Obama’s election, Axelrod was appointed as Senior Advisor to the President.[1] Axelrod left the White House position in early 2011 and became the Senior Strategist for Obama’s successful re-election campaign in 2012.[2][3]

Axelrod grew up in Stuyvesant Town on the East Side of Manhattan, NY.[4][5] He is the son of Myril Bennett, a journalist at PM, a left-wing 1940s newspaper, and Joseph Axelrod, a psychologist and avid baseball fan.[6][7][8][9] His family was Jewish. He attended Public School 40 in Manhattan. Axelrod’s parents separated when he was eight years old. Axelrod traces his political involvement back to his childhood. Describing the appeal of politics, he told the Los Angeles Times, “I got into politics because I believe in idealism. Just to be a part of this effort that seems to be rekindling the kind of idealism that I knew when I was a kid, it’s a great thing to do. So I find myself getting very emotional about it.”[10] At thirteen years old, he was selling campaign buttons for Robert F. Kennedy. After graduating from New York’s Stuyvesant High School[6] in 1972, Axelrod attended the University of Chicago. He majored in political science. [11]

As an undergraduate, Axelrod wrote for the Hyde Park Herald, covering politics, and picked up an internship at the Chicago Tribune. He lost his father to suicide about the time of his graduation from college[11] in 1977.

While at the University of Chicago, he met his future wife, business student Susan Landau. They were married in 1979. In June 1981, Susan gave birth to their first child, Lauren, who was diagnosed with epilepsy at seven months of age.[12]

Career prior to first Obama campaign

The Chicago Tribune hired Axelrod when he graduated from college. At the age of 27, he became the City Hall Bureau Chief and a political columnist for the paper. He worked there for eight years, covering national, state and local politics, and became the youngest political writer there in 1981.[13] Unhappy with his prospects at the Tribune, in 1984 he joined the campaign of U.S. Senator Paul Simon as communications director; within weeks he was promoted to co-campaign manager.[14]

In 1985, Axelrod formed a political consultancy company, Axelrod & Associates. In 1987 he worked on the successful reelection campaign of Harold Washington, Chicago’s first black mayor, while also helping to spearhead Simon’s campaign for the 1988 Democratic Presidential nomination. This established his first experience in working with black politicians and he later became a key player in similar mayoral campaigns of blacks, including Dennis Archer in Detroit, Michael R. White in Cleveland, Anthony A. Williams in Washington, D.C., Lee P. Brown in Houston, and John F. Street in Philadelphia.[11] Axelrod is a longtime strategist for the former Chicago Mayor Richard M. Daley[15] and styles himself a “specialist in urban politics.” The Economist notes he also specializes in “packaging black candidates for white voters”.[15]

In January 1990, Axelrod was hired to be the media consultant for the all but official re-election campaign of Oregon Governor Neil Goldschmidt.[16] However, Goldschmidt announced in February that he would not seek re-election.[17]

In 2002, Axelrod was retained by the Liberal Party of Ontario to help Dalton McGuinty and his party to be elected into government in the October 2003 election. Axelrod’s effect on Ontario was heard through the winning Liberal appeal to “working families” and placing an emphasis on positive policy contrasts like canceling corporate tax breaks to fund education and health.[18]

In 2004, Axelrod worked for John Edwards‘ presidential campaign. During the campaign, he lost responsibility for making ads, but continued as the campaign’s spokesman. Regarding Edwards’ failed 2004 presidential campaign, Axelrod has commented, “I have a whole lot of respect for John, but at some point the candidate has to close the deal and—I can’t tell you why—that never happened with John.”[19][20]

Axelrod contributed an op-ed to the Chicago Tribune in defense of patronage after two top officials in the administration of longtime client Chicago Mayor Richard M. Daley were arrested for what federal prosecutors described as “pervasive fraud” in City Hall hiring and promotions.[21][22]

In 2006, Axelrod consulted for several campaigns, including the successful campaigns of Eliot Spitzer in New York’s gubernatorial election and Deval Patrick in Massachusetts’s gubernatorial election. Axelrod also served in 2006 as the chief political adviser for Democratic Congressional Campaign Committee chair U.S. Representative Rahm Emanuel for the U.S. House of Representatives elections, in which the Democrats gained 31 seats.

Until recently, Axelrod also worked as an Adjunct Professor of Communication Studies at Northwestern University, where he, along with Professor Peter Miller, taught an undergraduate class titled Campaign Strategy, a class that analyzed political campaigns, the strategies used by them, and the effectiveness of those strategies.[23]

On June 14, 2009 Axelrod received an honorary “Doctor of Humane Letters” degree from DePaul University, speaking at the commencement exercises of the College of Communication and College of Computing and Digital Media.[24]

Axelrod first met Obama in 1992, when Betty Lou Saltzmann, a Chicago democrat, introduced the two of them after Obama had impressed her at a black voter registration drive that he ran. Obama consulted Axelrod before he delivered a 2002 anti-war speech,[25] and also asked him to read drafts of his book, The Audacity of Hope.[26]

Axelrod contemplated taking a break from politics during the 2008 presidential campaign, as five of the candidates—Barack Obama, Hillary Rodham Clinton, John Edwards, Chris Dodd, and Tom Vilsack—were past clients. Personal ties between Axelrod and Hillary Clinton also made it difficult, as she had done significant work on behalf of epilepsy causes for a foundation co-founded by Axelrod’s wife and mother, Citizens United for Research in Epilepsy (CURE) (Axelrod’s daughter suffers from developmental disabilities associated with chronic epileptic seizures.) Axelrod’s wife even said that a 1999 conference Clinton convened to find a cure for the condition was “one of the most important things anyone has done for epilepsy.”[27] Axelrod ultimately decided to participate in the Obama campaign, and served as chief strategist and media advisor for Obama. He told The Washington Post, “I thought that if I could help Barack Obama get to Washington, then I would have accomplished something great in my life.”[6]

Axelrod contributed to the initial announcement of Obama’s campaign by creating a five-minute Internet video released January 16, 2007.[28][29] He continued to use ‘man on the street’ style biographical videos to create intimacy and authenticity in the political ads. 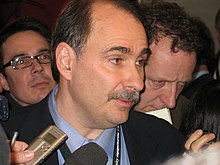 While the Clinton campaign chose a strategy that emphasized experience, Axelrod helped to craft the Obama campaign’s main theme of “change.” Axelrod criticized the Clinton campaign’s positioning by saying that “being the consummate Washington insider is not where you want to be in a year when people want change…[Clinton’s] initial strategic positioning was wrong and kind of played into our hands.”[30] The change message played a factor in Obama’s victory in the Iowa caucuses. “Just over half of [Iowa’s] Democratic caucus-goers said change was the No. 1 factor they were looking for in a candidate, and 51 percent of those voters chose Barack Obama,” said CNN senior political analyst Bill Schneider. “That compares to only 19 percent of ‘change’ caucus-goers who preferred Clinton.”[31] Axelrod also believed that the Clinton campaign underestimated the importance of the caucus states. “For all the talent and the money they had over there,” says Axelrod, “they—bewilderingly—seemed to have little understanding for the caucuses and how important they would become.”[31] In the 2008 primary season, Obama won a majority of the states that use the caucus format.

Axelrod is credited with implementing a strategy that encourages the participation of people, a lesson drawn partly from Howard Dean‘s 2004 presidential campaign as well as a personal goal of Barack Obama. Axelrod explained to Rolling Stone, “When we started this race, Barack told us that he wanted the campaign to be a vehicle for involving people and giving them a stake in the kind of organizing he believed in. According to Axelrod getting volunteers involved became the legacy of the campaign “[32] This includes drawing on “Web 2.0” technology and viral media to support a grassroots strategy. Obama’s web platform allows supporters to blog, create their own personal page, and even phonebank from home. Axelrod’s elaborate use of the Internet helped Obama to organize under-30 voters and build over 475,000 donors in 2007, most of whom were Internet donors contributing less than $100 each.[33] The Obama strategy stood in contrast to Hillary Clinton’s campaign, which benefited from high name recognition, large donors and strong support among established Democratic leaders.

Politico described Axelrod as ‘soft-spoken’ and ‘mild-mannered’[34] and it quoted one Obama aide in Chicago as saying, “Do you know how lucky we are that he is our Mark Penn?”[35] Democratic consultant and former colleague Dan Fee said of Axelrod, “He’s a calming presence.”[36] “He’s not a screamer, like some of these guys,” political advisor Bill Daley said of Axelrod in the Chicago Tribune. “He has a good sense of humor, so he’s able to defuse things.”[14]

On November 20, 2008, Obama named Axelrod as a Senior Advisor to his administration. His role included crafting policy and communicating the President’s message in coordination with President Obama, the Obama Administration, speechwriters, and the White House communications team.[37][38]

Axelrod left his White House senior advisor post on January 28, 2011. He was a top aide to Obama’s 2012 re-election campaign.[2][3] Axelrod also stated that his job as Obama’s chief campaign strategist in the 2012 campaign would be his final job as a political operative.[39]

It was announced on February 19, 2013, Axelrod joined NBC News and MSNBC as a senior political analyst.[40]

Other Mention of this person #2 HERE>>>

Other Mention of this person #3 HERE>>>

Other Mention of this person #4 HERE>>>

Other Mention of this person #5 HERE>>>

Other Mention of this person #6 HERE>>>

Other Mention of this person #7 HERE>>>

Other Mention of this person #8 HERE>>>

Other Mention of this person #9 HERE>>>

Aug 21, 2011 … David Axelrod appeared on ABC’s This Week to answer some questions about President Obama’s upcoming speech after Labor Day and he …

David Axelrod was stunned when Bill O’Reilly … – Crooks and Liars

David Axelrod Got It All Wrong: How He, The … – Crooks and Liars

Jun 10, 2012 … One of our objectives at The Winning Words Project is to help our elected officials , including (and especially!) the president, articulate the …

Jul 16, 2012 … Broadcast media seems to be quite obtuse when it comes to the overall implications of the Bain controversies over the past two weeks. This is …

Aug 4, 2012 … The president’s man: David Axelrod and Barack Obama. … Clearly, by hook or by crook, Axelrod intends to go out on a winning note. David …

Michelle obama,david axelrod,in it up to their ears in criminal …

Jun 19, 2009 … she is just an angry America hating militant who is a crook like her … 2006 recommended that the hospital hire the firm of David Axelrod, who a …

The Crook | THE ROYCROFT REPORT

Dec 11, 2013 … The Crook. with one comment … Merchants Of Despair : Barack Obama, David Axelrod, Harry Reid and Tim Geithner. In “un-categorized”.

Culture of Corruption: Obama and His Team of Tax Cheats, Crooks …

Culture of Corruption: Obama and His Team of Tax Cheats, Crooks, and ….. of Chicago Medical Center, aided by Obama’s senior adviser, David Axelrod.

Obama’s main man will do whatever it takes to fell Republicans and conservatives. Where does his ruthlessness and drive come from?

24 Sep 2010 … David Axelrod: Skeptics Are Wrong ….. Best Supporting Actor Oscar for his hilarious turn as Otto, an Anglophobe crook, in this 1988 comedy.

All the president’s men go after Romney | The Daily Caller

30 Oct 2011 … This charge was escalated Sunday when David Axelrod, one of Obama’s top … The messages have not accused him of being a crook.